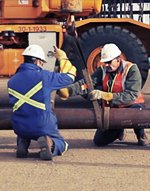 How Safe is operating a Pipeline in Alberta?

A new NDP Government has shaken up the Alberta Oil and Gas industries confidence that Pipeline licenses will be approved as a means to transport petroleum products There is a prevailing concern that the NDP will press for more stringent environmental standards for energy development, which may effect jobs in the province.
So, whatever your individual politics may be, the question regarding pipelines should be “How Safe is it to actually operate a Pipeline in Alberta”?
A number of Regulatory agencies were set up in the province to be the Public watchdog for Pipeline safety. The AER, Alberta Energy Regulators, was set up in Alberta to respond to the public concerns surrounding this industry and covers about 415 000 kilometres of Canada’s oil and gas pipelines operating solely within Alberta’s , along with some activitie from certain rate-regulated gas transmission pipelines covered by Alberta Utilities Commission, for which the AER conducts field inspections and provides incident response. The National Energy Board has the jurisdiction for Oil and gas pipelines that cross provincial or federal borders. The AER ensures that Pipelines complies with Alberta’s Pipeline Act, Pipeline Regulation, and applicable Canadian Standards Association (CSA) standards which specify the design, construction, operation, and maintenance—including discontinuation and abandonment—of regulated pipelines. There is a pipeline inspection program considers pipeline fluid characteristics, location, line size, failure history, and the company’s compliance history set up by AER . A higher inspection priority. is given to Pipelines with greater potential risks are given a higher inspection priority.
In Alberta there are comprehensive regulations and stringent requirements to address pipeline risks. Management of these potential risks involves reducing the likelihood of a pipeline failing and reducing the size of a potential release., Safety rates in recent years have been at their highest ever, even with some recent leaks The AER continues to improve that record of success. With Albertas’s rigorous pipeline safety rules, Act, requirements, and safety record .

AER must balance the public and environments right to safety while allowing the right of licensees to develop the energy resources. It has stringent requirements for licensees to implement integrity management programs to identify and mitigate risks associated with a particular pipeline. This includes corrosion mitigation and monitoring Annually, these. Licensees must re-evaluate corrosion potential and keep records of the actions taken to ensure compliance with all regulations. To continuously monitor pipeline operations, Pipelines carrying only liquid hydrocarbons must have automated leak detection systems . They also must alert the operator to unusual operating conditions, allowing for a fast response at the first sign of pipeline failure.
The AER holds licensees responsible for incident response, which might include assistance from several other sources, including government agencies or other licensees operating in the region.
In July 2012, Alberta’s Minister of Energy, directed the AER to conduct a third-party pipeline safety review. This included 17 recommendations to enhance the Alberta pipeline regulatory system.
The conclusion is that Pipeline Safety is an efficient means, compared to other modes of transport of oil and gas. There is a stringent set of requirements in place to keep Petroleum